Spotify vs Apple Music: What is the difference

Spotify is a music, podcast, and video streaming service that was officially launched on 7 October 2008. It provides digital rights management-protected content from record labels and media companies.

Apple Music is a music and video streaming service developed by Apple Inc, launched on June 30, 2015. Users select music to stream to their device on-demand, or they can listen to existing, curated playlists. 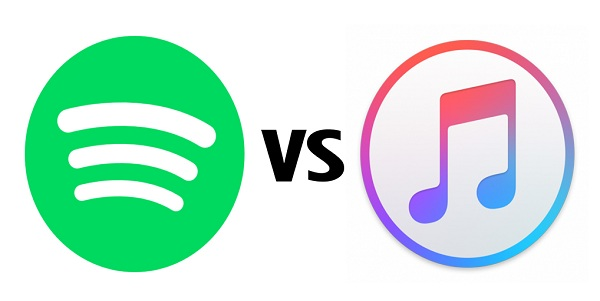 Spotify vs Apple Music: What is the difference

Price: The price for Spotify ranges from free to £14.99. You can try out the premium version with a three-month trial for a total price of 99p or pay the standard price of £9.99/mth. Students enjoy a discount for the subscription at £4.99/mth. The family plan is £14.99/mth for up to five people, making it the cheapest version of Spotify per person at about £3/mth.

Apple Music offers a free three-month subscription to test it out. After that, the prices are pretty comparable to Spotify Premium's rates: £9.99/mth for individuals and £4.99/mth for students. Apple Music beats Spotify's family plan, though: £14.99/mth for up to six people, which is about £2.50 per person. Spotify offers a family plan for the same price, but only for up to five people so it equals about £3/mth for each person. 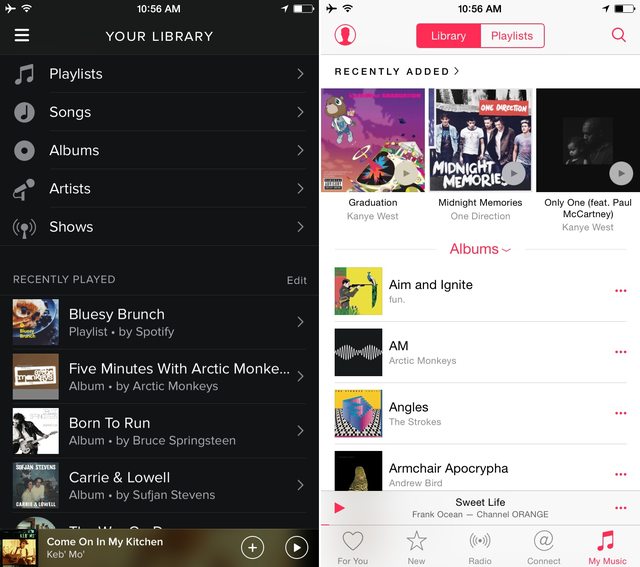 What you get: Creating a free Spotify account gives you ad-supported shuffle play of the app's entire catalogue. The premium subscription comes with ad-free services that include shuffle play, unlimited skips, offline listening and the ability to make playlists. All Apple Music users get ad-free unlimited access to songs already in iTunes and the service's library. Offline listening and curated radio stations are also options.

Streaming speed/audio quality: Spotify has three quality ratings for streamings, all in the Ogg Vorbis format. The choices are Normal at 96Kbits/sec, High at 160Kbits/sec and Extreme at 320Kbits/sec. Users with the free version will automatically get the Normal version, and Premium subscribers can choose at what level of streaming quality the music plays, but the Automatic style is recommended – it will change according to your network connection, with a minimum rate of 96Kbits/sec. Apple Music is streamed in the 256Kbits/sec in the Advanced Audio Coding format.

Downloading ability: Spotify Premium account allows you to download 3,333 songs on up to three devices. Downloading the songs lets you play them offline with no internet connection. Apple Music users can have up to 100,000 songs – which can be downloaded for offline listening – in their iCloud Media Library, according to Apple Music's page. But Apple's Service and Conditions states that songs from Apple Music and iTunes don't contribute to this quota. So unlimited?

Apple Music Converter: Specially designed to remove DRM from Apple Music tracks, iTunes M4P Music and Audiobooks and convert them to plain MP3, WAV, AAC, ALAC, AIFF and FLAC at a super fast speed. All ID3 Tags will be smoothly preserved in output MP3, M4A or WAV files after conversion.

Spotify Audio Converter: Enables you to decrypt and convert Spotify music or playlists to common MP3, WAV, AAC, FLAC, ALAC and AIFF with ID3 tags and metadata kept. It supports batch conversion. With the intuitive interface, you can convert Spotify songs with up to faster speed and CD output quality.


Note: The trial version of NoteCable Spotify Converter has 3-minute conversion limit, and users can convert 3 songs at a time. You can unlock the time limitation by purchasing the full version at $14.95.